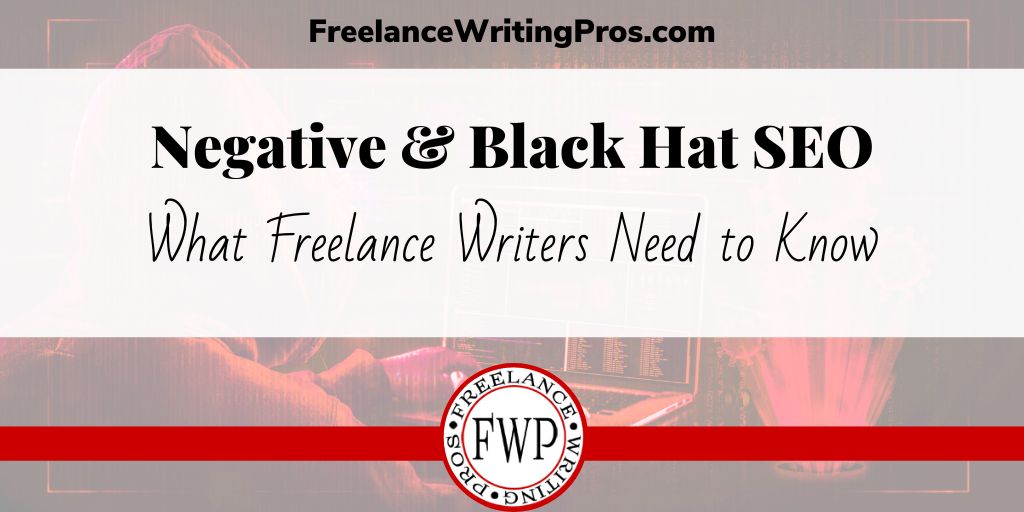 Whether you take on SEO-oriented projects for clients or not, as a freelance writer there are some things you should understand about search engine optimization. Specifically, you need to be aware of the shadier side of SEO and how it could impact you and your business.

What are these shadier aspects of search engine optimization? We’re talking about what’s known as “black hat SEO” and “negative SEO.”

But first, if you’re totally new to SEO, you can read my article, SEO 101 for Freelance Writers, over on Lori Widmer’s Words on the Page blog.

Let’s start with an overview of what these SEO schemes are, so you know what to look out for.

In its most basic sense, black hat SEO is when you violate rules all your search ranking competitors are expected to follow.

Who sets these rules?

Search engines have terms that are supposed to be followed if a site wants to rank well (which, in turn, sends more traffic their way).

Think of them as similar to the terms of service (TOS) you agree to when you sign up for a service. Violate them, and you risk losing access.

With black hat SEO, site owners or their SEO team either blatantly violate these rules (which can be easy to identify), or they’ll go about it in covert ways in an attempt to game the system and gain an unfair advantage.

Here are some examples of black hat SEO tactics you’ll want to avoid:

If you missed it in the Freelance Writing Pros newsletter, you can learn more about one of these black hat SEO link extortion scams, and how it led to Philippa Willitts and I recently taking down two fake law firm sites being used in them, in the newsletter archives.

While not all these black hat SEO tactics are as effective as they used to be, they’re all still used often.

Even large sites still get away with it, such as this example of keyword and link-stuffing on every category page of a certain freelance exploitation mill (and, yes, these are “dofollow” links and they continue to rank well for many of the keywords they target in this way): 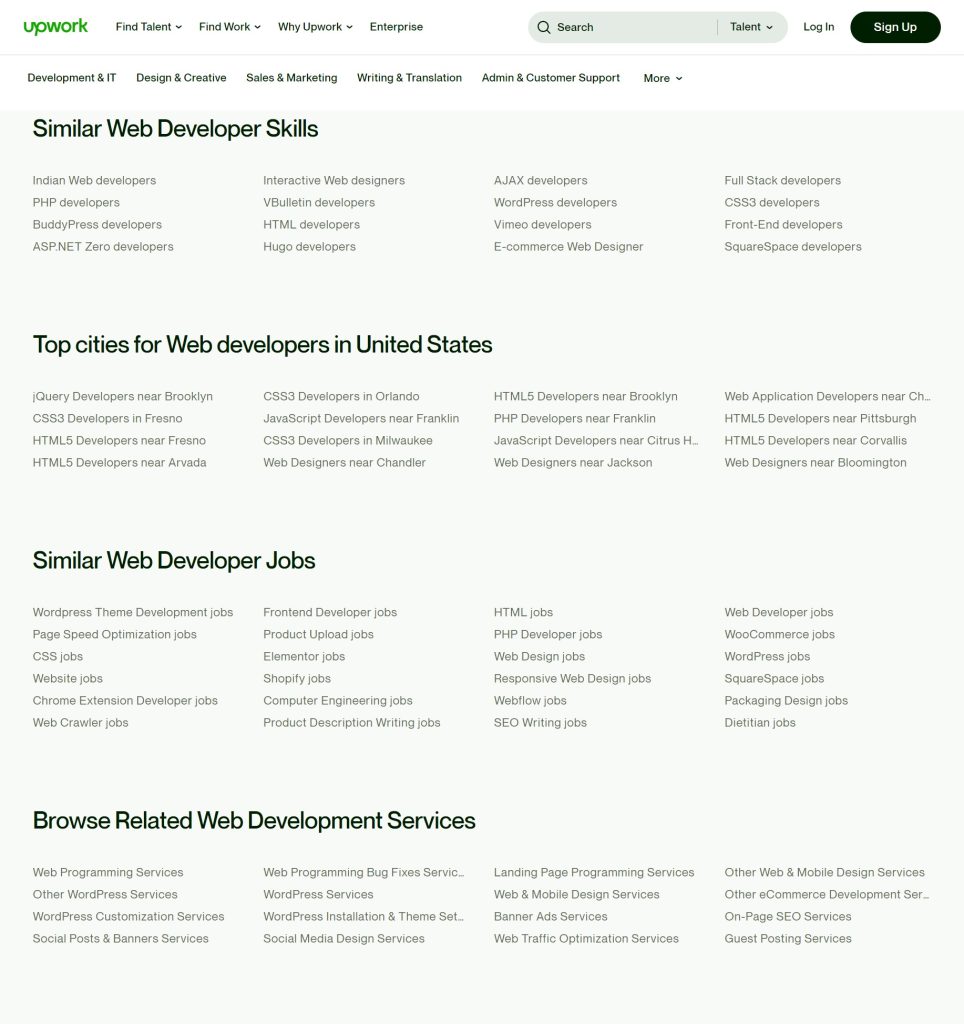 Negative SEO is similar to black hat SEO, but it’s designed to hurt the rankings of another website or company.

Sometimes the aim is to harm a competitor to boost the SEO schemer’s own rankings. And sometimes it’s simply about that harm, such as a disgruntled customer or former employee trying to get a company penalized to hurt their traffic and resulting income.

Here are some examples of what a negative SEO campaign might include:

“OK,” you might think. “I’m not going to pull this shady BS, so I don’t really need to worry about these things, right?”

Let’s look at some of the ways freelance writers can be impacted by black hat and negative SEO, with or without their consent.

There are two key ways you could be hurt by, or pulled into, these kinds of SEO schemes as a freelance writer:

Let’s take a closer look at both.

How Your Freelance Writing Business Can Get Targeted

Look. I know there’s a feel-good crowd of freelancers who will tell you fellow freelance writers are colleagues and not “competition.”

If you’re in business, you have competition. “Competition” doesn’t mean bitter rivalries. You can even be close friends. Those colleagues aren’t the problem you need to worry about.

But there are less-than-ethical freelance writers out there. I’ve seen so much of this first-hand.

This barely touches on the shady sh*t going on just within the freelance writing community.

And con artists, insta-experts, and these black hat bullshit artists are routinely promoted by others who don’t know any better. If you haven’t been directly impacted by it – or if you weren’t sure what to look out for – you might be none the wiser.

I can all but guarantee if you’ve been around this community for at least a few years, you know (and quite possibly trust) at least two or three of these people.

So never assume your fellow freelance writers won’t stab you in the back professionally if they think it will help them get ahead, including some who act like friends to your face. But they’re not the only ones you need to be concerned about.

How Crooked Characters Can Hurt You as Their Competition

Regardless of whether or not you choose to understand and embrace the healthy side of competition in business, you can rely on some people to take competition too far.

If you have any kind of visibility within your freelance writing specialty, you’re at risk of being on the receiving end of others’ black hat or negative SEO campaigns.

Chances are, you won’t be directly targeted with a negative SEO attack. Because freelancers are solopreneurs, they likely wouldn’t have the time to do this even if they wanted to. And the cost to hire someone isn’t insignificant (though that risk is greater if you specialize in high-value niches).

But here are some more likely ways you might be affected by a competitor’s SEO schemes:

Also, you have to understand there can be other motivation behind negative SEO campaigns and related attacks.

You could be at particular risk if you’re involved in political journalism or if you have high visibility in another very competitive or controversial niche. In those kinds of cases, it might not be a freelance competitor targeting you.

How Clients Can Put You at Risk

Perhaps more important, freelance writers should understand that there are potential clients out there looking to engage in black hat and negative SEO. And they expect you to do their dirty work for them.

“But I would never do that,” you might say.

Not intentionally, perhaps. But freelancers are roped into these schemes all the time. Here’s one of the most common examples.

A popular shady link-building tactic these days (and for the past 5+ years) is having SEO people pose as fake PR firms.

They believe these sites provide more valuable backlinks in terms of getting their websites, or their clients’ sites, to rank higher in Google.

The fake PR person then looks for writers publishing content to those sites. These are often freelancers.

They reach out to the individual writers and propose one of two things in most cases:

In either case, the fake PR rep generally expects a “dofollow” link. More important, they don’t want the paid relationship of these links disclosed – not publicly in the article, and not to the publication the writer works for.

This poses a conflict of interest that any ethical freelance writer would reject.

The writer is paid by the publication, and they shouldn’t be taking third-party additional payments for link placements. They especially shouldn’t do this without their employer’s, or client’s, knowledge and consent.

Quick tip: Legitimate PR professionals don’t go around offering to buy dofollow links. And they definitely don’t ask writers to add links without required disclosures. A legit PR pro would be working with the publisher on coverage opportunities, not creepily seeking out freelancers who wrote for them in the past with shady ads on job boards and classified sites, as these are often advertised.

FYI: Many big sites are aware of these schemes, and they will immediately terminate any employee or freelancer writing for them if they accept third-party payment for links or other mentions in their content.

Once you know what to watch out for, this particular type of black hat SEO is easy enough to avoid. But it’s not the only type targeting freelance writers.

1. A client will hire a freelance writer to rewrite, update, combine, or “spin” existing content.

The concern here is whether or not the client actually owns the copyright to the original work or works.

If you’re approached about this kind of gig, make sure the content is already published on the client’s site and not elsewhere. And if you have any concerns over ownership, ask the client outright.

Remember, content can be published to their site without them owning the copyright too, depending on the rights they purchased from previous writers. If they don’t own the copyright, they don’t have the right to authorize you to create derivative works.

The biggest risk with this comes when a client says they have a large selection of articles to be re-worked.

While not always a problem (such as when overhauling a large archive of evergreen content), it’s a red flag.

The concern is the content might have been scraped from competitors, or they’re looking to have multiple competitors’ articles combined and rewritten into a longer piece they believe search engines will prioritize.

If a client doesn’t own the originals, they can’t authorize you to create a derivative. And it falls on you to verify this as a freelance writer.

2. Clients will hire freelance writers to create copy or content targeting their competitors.

This can happen with any type of online writing gig, but be especially wary of review websites.

Sometimes they’re fake positive reviews of their own primary business. And sometimes they publish fake negative feedback about competitors.

If you’re approached about writing content for a review-heavy or comparison website, always verify ownership and any potential conflicts of interest up front.

If the client dictates whether reviews, profiles, rankings, etc. should be positive or negative for specific companies rather than having you conduct true reviews or independent profiles, run.

Here’s one I’ve run into personally.

I have no issue at all with sponsored content. But that sponsored content should always be clearly disclosed, be honest, have nofollow (or rel=”sponsored”) links to a sponsor’s site, and it should follow FTC guidelines if any party is US-based.

There’s nothing ethically wrong with writing sponsored content on behalf of clients.

This can involve writing content your client intends to pitch to publications as a sponsored article.

It can also involve writing content for the client’s own site on behalf of their sponsors (which often works out to be far more neutral than letting sponsors submit their own articles).

Here’s the potential issue though:

I found out something like this was happening with a long-time client a couple of years back, and I haven’t worked with them since. Now, they didn’t have to follow the same FTC guidelines I did as they weren’t based in the US, but it still amounted to a black hat paid link scheme – one being run by one of the most popular and well-ranked WordPress-related websites around.

Fun fact: A colleague worked full-time for the WordPress-related site in question. A conversation with her about this kind of shady SEO showing up in that joint client / employer work was one of the inspirations to cover this topic and make sure other freelance writers were aware of these schemes.

These are far from the only ways you might be targeted as a freelance writer – either with you or a client becoming a victim of a negative SEO campaign or having prospects or clients try to engage you in their black hat SEO tactics.

It is a broad enough overview though, I hope, to help you identify these types of SEO schemes should you ever be affected by one or solicited to take part in one.

Maintaining your own professional ethics sometimes requires more than good intentions. It requires understanding what you and your clients are up against.

Subscribe to the Freelance Writing Pros newsletter to get notified of new blog posts and receive subscribers-only content.

Jenn also writes fiction under multiple pen names and is an Active member of the Horror Writers Association.