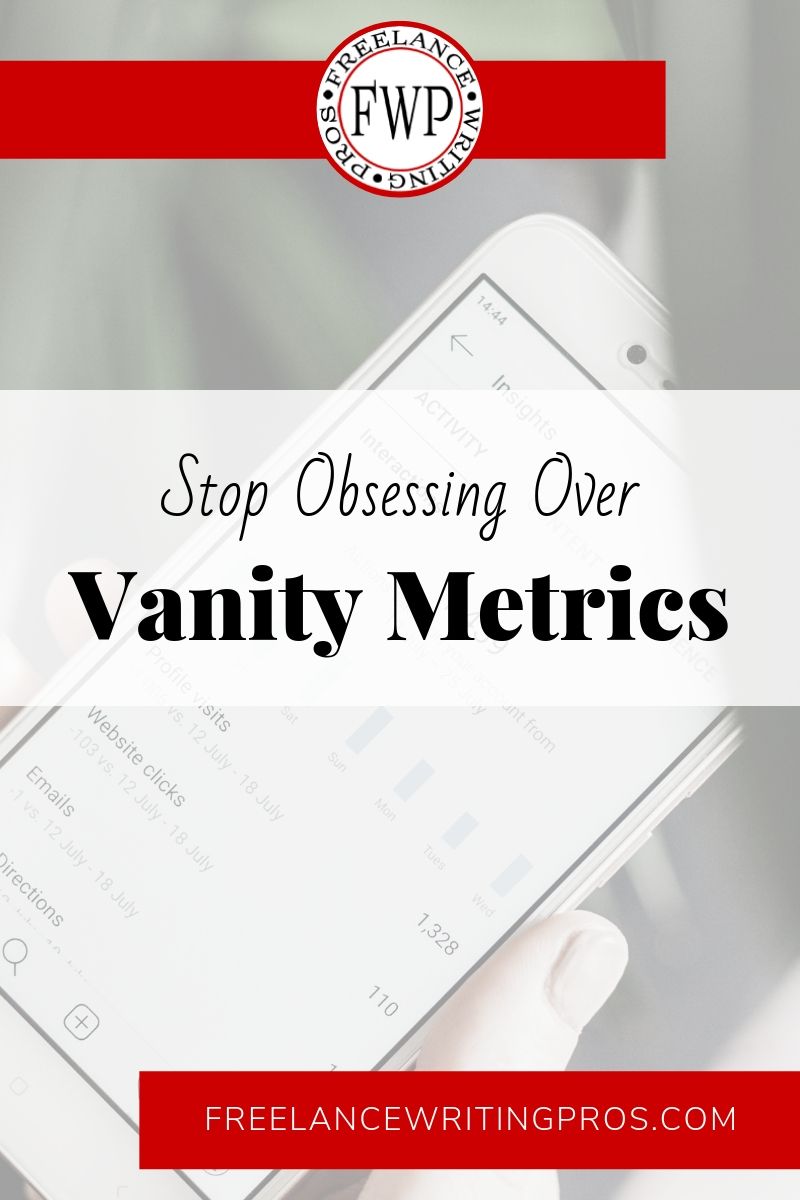 Coming from a background in PR and social media consulting, I’m no stranger to seeing colleagues and clients alike cling to vanity metrics. They, along with the resulting fake authority, mistaking of popularity for influence, and resulting linkbait stunts, have long been pet peeves of mine. And it’s something I see from my fellow freelance writers often enough too.

If you fall into the trap of chasing vanity metrics, you risk holding yourself back from more meaningful results in your marketing and PR efforts. And you risk making yourself look like a fool.

Let’s talk about what I mean by “vanity metrics,” why you shouldn’t worry about them, and what you should focus on instead.

What are Vanity Metrics?

Simply put, vanity metrics are an exercise in ego.

They’re numbers that sound good but mean very little. Let me give you an example.

Some do it under some pretense of politeness (though that’s not the case if it comes with threats to unfollow others). But mostly it’s a means of boosting one’s own follower count on a social network. And it’s not a problem exclusive to Twitter.

Here’s the issue with this:

They mean absolutely nothing.

There are generally two groups of people who obsess over these numbers:

When I see freelancers in particular behaving this way, it’s usually the former — they’re seeking validation in the wrong places.

And “influence” is what people tend to want to prove by boasting large follower numbers. They figure it’ll attract naive sponsors who don’t know any better yet. Or they use those numbers to build unearned trust so they can sell things to the legitimate followers they do have.

Those “legitimate” followers are the people who follow you because they genuinely care about what you have to say.

The rest? Those would be:

Real influence has nothing to do with your inflated follower counts. Having 10,000 followers sounds good if you need to stroke your own ego. But if they aren’t legitimate followers with an active interest in what you have to say, you have little to no actual influence over them.

In this case, you would be better off with 1000 followers actually influenced by your words than 10,000 followers that make you feel all warm and fuzzy but who don’t give a damn about what you actually have to say.

Here’s how you know when follower counts = trustworthiness:

In other words, total follower counts are a vanity metric. What really matters is the ratio.

Let’s be real for a moment. You aren’t following 10,000+ other people with a genuine interest in what they all have to say. It would be impossible to manage. That’s not how relationships or influence work.

The only reason to follow massive numbers of accounts is to artificially inflate your own follower count because you know many people jump on “follow-backs.”

This is no different than old school link exchanges and “Stumble exchanges” where people would exchange social bookmarking shares. Links earned this way were penalized by Google a long time ago for good reason: they amplify fake interest and false authority, which manipulates search rankings.

Automatic follow-backs are no less spammy, manipulative, or frankly sad than these penalized types of exchanges. They’re just happening on different platforms.

This isn’t just important for freelance writers because it might affect your own social media marketing. It’s also important to understand this dynamic so you don’t fall into the fake authority trap of assigning credibility to sources based on vanity metrics that don’t actually deserve trust.

There are some exceptions to the ratio rule.

Most notably, you can’t always rely on ratios when it comes to newer accounts. When someone sets up a brand new social media profile, chances are good they’re going to follow people they’re interested in connecting with faster than people will find and follow their new account.

That said, it’s still a good thing to look at when deciding who you trust. How many people are they following vs how many follow them?

A freelance writer will naturally attract more followers the more their work is published because they’re reaching more readers. That doesn’t mean it makes sense for that freelancer to follow back every reader as if they’re interested in each of their updates.

If something feels “off,” it usually is.

Does that mean I’m saying you should go unfollow or un-friend a lot of people to improve your ratio? No. That’s just as manipulative.

What it means is you should take a look at your current profiles and ask yourself why your networks look the way they do. Why are you connected to those people? If there’s no good reason for it — especially on professional profiles — it might be time to prune things.

But if you genuinely do stay on top of those updates and want to keep following those people, don’t weed them out just to make your numbers look better. That’s no better than chasing vanity metrics in the first place.

And if you’re one of those writers who feels everyone you follow should have to follow you back, please get over yourself. Following someone on social media isn’t something to reward. It takes little to no effort. You’re supposedly doing it for your own interests anyway. So, no, you don’t get a cookie.

“Likes” and Retweets are other examples of vanity metrics.

If you’ve been blogging as long as I have, you’ll notice the blog comment scene has changed a lot over the past decade. Blog comments are fewer and harder to come by unless you ignite some fiery debate or have a long-loyal set of readers. It’s especially tough for newer blogs.

This correlated in large part with the rise of social media shares — you know, those bright little buttons you probably have somewhere on every blog post.

Why would this affect blog comments?

If you give people the option of writing you a custom response or the option to click a button to show they liked something, they’ll generally click the button. It’s easy. It’s fast.

Yes, you still want people to share your content on social media. That’s especially true if the person sharing it has genuine influence and their audience is also your target audience.

But watching RT numbers and “like” counts increase doesn’t mean a heck of a lot in the grand scheme of things. They matter in terms of quality, but not so much when it comes to quantity (unless, again, you’re a fake social media expert desperately trying to validate your existence to clients).

Look. I’ve yet to meet a freelance writer who’s like “Wheee! Marketing! I wish I could spend twice as much time on that instead of actually writing!”

Maybe someone like that exists. Marketing can be fun and interesting. But its job is to bring in enough clients so you can get paid.

Because your income as a freelance writer is based on client work and not how long you spend putzing around on social networks, you want your social media marketing to take only as much time as necessary to be effective. You’d rather free up more time as billable hours, right?

When you get caught up worrying about vanity metrics you put quantity over quality. And that’s a problem freelance writers should have a better grasp on than most. After all, we’ve been having the quality vs quantity content debate with clients for years.

You also risk chasing an ego boost when you’d likely rather boost your bank balance.

Social media marketing takes time. And it’s easy to let it lead to distraction. Any marketing effort takes time. What you need is for that time to be well-invested in attracting gigs.

Chasing vanity metrics will only do that if you’re targeting the shallowest of clients who don’t yet know any better. Most would be more swayed by a solid portfolio than you humble-bragging about how many people you followed back but couldn’t so much as sway to click a link.

What Metrics do Matter?

Instead of getting caught up in the big, easy numbers of vanity metrics, focus on measurable results that actually matter.

For example, if you share information about a new service launch or special promotion, the number of “likes” it gets is meaningless.

But, the number of people clicking over to your site? That click-through rate matters.

And the number who go from clicking through to your site to actually hiring you? Those conversions are golden.

You have to remember, when it comes to promoting your freelance writing services, all that ultimately matters is whether or not people hire you.

Focus your time in those areas.

How can you start?

Social media and vanity metrics go hand-in-hand because social networks were designed to encourage near mindless activity to keep you addicted to the validation and on those websites as long as possible.

If the time you spend there, and the boost your ego gets, don’t pay the bills, you can do better. In the future we’ll talk more about building a more effective marketing mix and issues of authority brought up in this post. But for the time being, figure out what you’re really after and if your current social media marketing is actually giving you that.

If you enjoyed this post, subscribe today so you never miss future post updates. Plus, you'll get weekly advanced marketing, PR & business tips for experienced freelance writers in the Freelance Writing Pros newsletter.