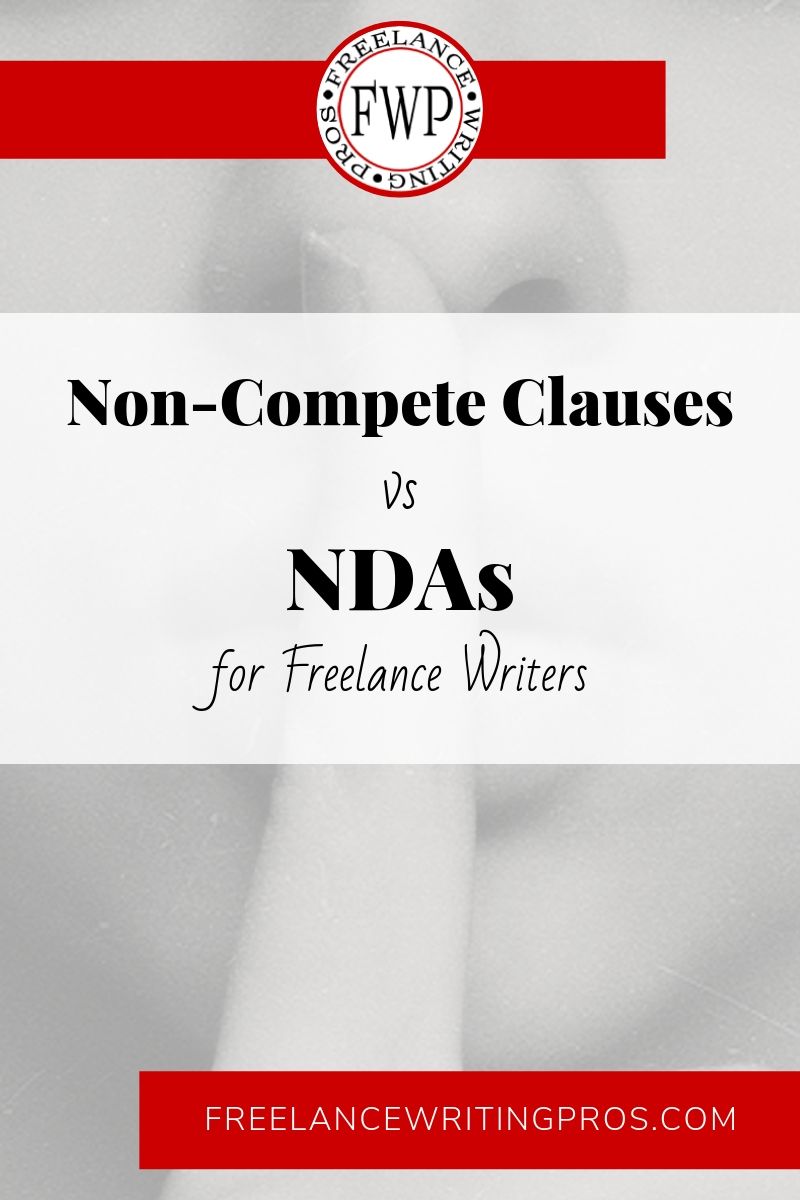 A while back, a fellow writer contacted me about about a writing job. She worked full-time for an employer now rather than freelancing, and she wanted to know if I could refer freelancers their way by posting the gig over on my job board.

In our conversation, she mentioned that the gig would require the writer to agree to a one-year non-compete clause to protect her employer from competitors. As a result, I let her know it wasn’t something I’d be able to post because I won’t promote freelance writing jobs with this requirement.

Let’s talk about why non-competes pose a problem, what the company could have done instead, and what you can do if asked to sign a non-compete clause you aren’t comfortable with.

The Problem with Non-Compete Clauses

Non-compete clauses are more common in an employment scenario. It helps to prevent talent poaching and keeps employees from quitting and directly competing with their former employer.

They generally have limits (such as the one-year limit in this case) and should be somewhat narrow in scope (an e-commerce software developer being barred from working for direct competitors vs being forbidden to take any kind of development work for example). If they’re over-reaching, they may not be enforceable anyway.

Despite these limits, non-compete clauses are a problem if  you’re a freelance writer — especially if you’re a niche or industry expert and you specialize in working with that narrow group of clients. It’s essentially one client in your specialty area saying you can’t take gigs from other clients in your specialty.

But that’s kind of the point of being a specialist. And, as a business owner, you should not let any individual client dictate with whom else you can or cannot work. Making sure you’re “allowed” to take on other clients is part of the legal distinction between employees and independent contractors.

Just “no.” End of story. Non-negotiable.*

Your value as a specialist falls within the industry or niche knowledge you bring to the table. And you can, and should, exercise that value by pursuing multiple clients in that particular market.

That said (as in this case), companies are concerned their freelance writers might take inside knowledge from their company and use it to benefit one of their competitors.

But a non-compete clause isn’t the right solution here.

* The one exception I might consider: a very limited non-compete clause with middlemen clients (like marketing, PR, or SEO firms, where I’m working for the firm’s clients). I wouldn’t sign one forbidding me from working with other firms they might compete with. But I would sign one stating I couldn’t try to poach their clients or work with them directly if they approached me for a limited amount of time after our contract ends. So, if a firm hires me to write one of their clients’ press releases, I won’t privately contact that client and offer to do the same for them directly, cutting out the middleman.

Instead of a non-compete clause, a non-disclosure agreement (or NDA) makes more sense in many freelance writing contracts. And that’s what I suggested to the colleague who contacted me.

See a sample NDA from NOLO.

This involves a more limited agreement between you and a client. It doesn’t forbid you from working with other clients, even similar ones. Instead, it forbids you from disclosing inside information to anyone else.

So if Client A tells you about their future business plans due to a project you’re working on for them, you can’t share that information with Client B. You would have to work for Client B almost as if you had no relationship with Client A.

Another example sometimes comes up when I’m writing white papers. Occasionally a client will pay for an expensive research report because they want the paper to reference specific industry data. These can run several hundred to several thousand dollars depending on the research.

I can use that material in writing their white paper. But with an NDA in place I couldn’t share that information with another client or use it in writing another white paper (either for a client or for my own business).

That’s fair. Your client’s confidential information and resources would be protected. And this also protects your right to work for multiple clients within your target market.

What if a client asks you to sign a non-compete agreement and you choose not to do that?

Walking away isn’t your only option. Consider asking the client or prospect what their concerns are.

If they really don’t want you working with similar clients, you can have a conversation about why that’s a problem for freelance professionals — especially specialists. If they want you exclusively, they can hire you full-time as an employee, pay their portion of taxes and benefits, etc. The client role lets them take on less responsibility, but as a result they don’t get those extra perks like control over your schedule and other contracts.

If their concern, like in the example here, roots in confidentiality and protecting inside information about their business, you’re in luck. You might be able to convince them to swap the non-compete agreement for an NDA instead. It never hurts to discuss it, especially if you’d otherwise walk away anyway.

While NDAs might be more appropriate for freelancer-client relationships, they can pose their own problems. For example, a common use of NDAs is to prevent a freelance writer from disclosing their working relationship with the company. That means you might not be allowed to include that client or their projects in your portfolio.

Why would a client ask you to keep the relationship private?

This can be a result of ghostwriting gigs. Some clients don’t want it publicly known that someone other than their staff, owner, or other executive writes their content.

For some clients, you might not care if you can mention them to other prospects. But what if it’s a high-profile client and you think having them in your public client list would be valuable to you?

Worst case, keep that value loss in mind when you take on the gig. If you’re going to miss out in some way that you would otherwise benefit, consider charging more for that project. It’s a good reason to charge more for ghostwriting in general.

Getting Around an NDA (Without Violating It)

If a client is dead set against you mentioning them by name publicly, there are other ways you can benefit from the relationship without violating the NDA.

For example, you can describe the client without naming them (their market, their size, the reach of your work for them, etc.). It might not be as exciting as naming the company, but saying you worked with a Fortune 100 company in your specialty industry is much more valuable than saying nothing at all.

Another option is to turn your experience working for the client into a post for your professional blog. Describe the company in general terms as noted above. Then talk about the project in terms of your working process, what you learned from it, how well your content or copy performed, etc. — a sort of generalized case study without direct client input. At the very least, this gives other prospects insight into your working process and the type of work you routinely take on.

This isn’t a comprehensive guide to non-competes and NDAs. But these are both important contractual issues to be aware of. You have to decide which you’re comfortable agreeing to, and which you’re not. Always know what rights you’re giving up, and for how long.

If you have specific policies in place as to what you will, and won’t, agree to I’d love to hear about them in the comments.

Disclosure: I am not a lawyer. This is not legal advice. I highly recommend you have an attorney review any standard contracts you create for your freelance writing business, as well as any significant contracts you sign.

Subscribe to the Freelance Writing Pros newsletter to get notified of new blog posts and receive subscribers-only content.

Jenn also writes fiction under multiple pen names and is an Active member of the Horror Writers Association.